Juniper and berry aromas play delightfully with subtle spice notes on the nose.

The palate is full of strawberry and raspberry flavours that are accompanied by a rich chorus of nutmeg, aniseed, piney juniper and nut.

The smooth finish is rounded out by a delectable berry sweetness.

The ancient recipe was hiddden deep in the vaults of the Royal British Library.

This beautiful pink gin is based on the authentic Gin 1689 recipe where strawberries and raspberries are added to the distillation process, giving it a distinctive pink colour.
In the original three centuries old recipe it was recommended to drink this gin with these two fruits, bruised in a glass.
Now we know this pink gin is as close as it gets to being the first ever pink gin in the world.

The perfect refreshing G&T with the taste of history. As modern as you like!

Alternatively you could gently muddle the berries and add some fresh mint too. 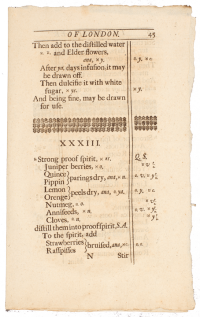 Gin 1689, a century-old recipe brought back to life! During the so-called Glorious Revolution of 1688-1689, William of Orange didn’t only chase away the British King, he also introduced a typical Dutch item to Britain. Genever, soon abbreviated to Dutch Gin and then simply Gin, which became hugely popular.

Now, over 3 centuries later, the Amsterdam Craft Gin Company has re-introduced that authentic recipe from back in time. Founder Alexander Janssens studied the archives of the British Library to retrieve the original recipe notes. It took him almost two years to find these.
With help from the Dutch master distiller Herman Jansen from Schiedam they developed and revived the centuries – old recipe that conquered the Britain in 1689.
The result is Gin 1689, a tribute to Dutch craftsmanship over three centuries ago.